Tower Lotteries are delighted to be able to announce that income from the lotteries we represent now single-handedly pays for the equivalent of 16 air ambulances across The United Kingdom.  This remarkable achievement has only been made possible due to the high regard in which air ambulances are held, the generosity of people wishing to support their respective lotteries and the hard work and dedication of fundraisers throughout England, Scotland and Wales.

The cost of an air ambulance varies depending on the number of hours it flies.  Some of our clients run a 24-hour service and therefore the costs of operating these helicopters are more than those who operate 12 or 16 hours a day.  The Lincolnshire and Nottinghamshire Air Ambulance are the latest charity to announce they are moving to 24-hours a day later this year, which is fantastic news for people living in these two counties but as a result their costs are set to increase from £2.5m to £4m a year.  Every mission an air ambulance undertakes costs a minimum of £2,500 but this can increase hugely depending on the outcome of the incidents they attend. 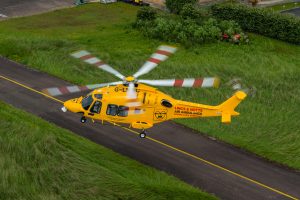 The combined membership of the air ambulance weekly draws that Tower Lotteries represents, has surpassed 1 million in 2017.  The figure continues to grow month-by-month but every new member provides vital income to the charities and the money generated automatically goes towards funding the helicopters that save lives every hour of every day.

It is estimated that our air ambulance partners will generate profit of more than £40m from their respective lotteries in 2018.  If you are a member of your local air ambulance lottery, you can be assured that the money raised is going directly to front-line services of a helicopter that could land in your village or town today!  Income from weekly lotteries is far and away the biggest source of revenue to each charity and this is vital as members pay by direct debit and therefore they can budget to receive this money in advance and plan accordingly.

Many charities have able to buy bigger and faster helicopters in 2017, Essex & Herts Air Ambulance Trust welcomed a new Agusta Westland 169 in July and Midlands Air Ambulance Charity has a state-of-the-art Airbus H145 about to become operational in 2018.  The Children’s Air Ambulance, a national charity, also have 2 new AW169 about to come into operation, a move that doubles their fleet and means they can transfer double the number of children in their hour of need.   Many air ambulances have also moved in to new premises, Wales Air Ambulance being just one of them and Wiltshire Air Ambulance and Great Western Air Ambulance will join them in 2018.  This wouldn’t have been possible, or indeed necessary, without such successful lotteries.

Tower Lotteries started working with air ambulance charities back in 2008 and we are honoured to play a small part in their success story over the last 10 years.

If you would like to be part of our amazing team, we are always on the look out for representatives across the country to join us in building on these successes.  If you are interested, please send your CV to office@towerlotteries.com or give us a ring on 0333 577 5707.